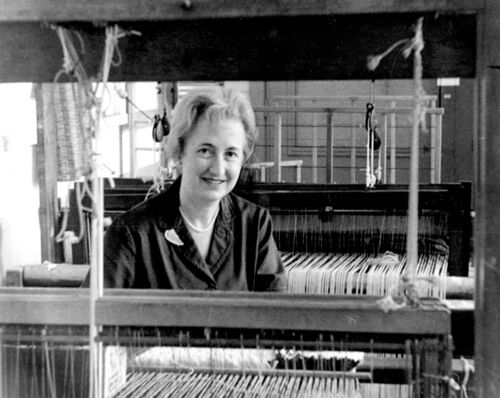 Else Regensteiner, 1961. Courtesy of the Art Institute of Chicago.

The Bauhaus was supposed to be an equitable place. When Walter Gropius founded the progressive school in 1919, he called for an environment that treated art and design—as well as men and women—with the same level of respect. “Every eligible person whose talent and training are considered adequate will be accepted without regard to age and sex,” he wrote in the Bauhaus’s statutes.

The reality, however, wasn’t so utopian. Most of the institution’s workshops—which ranged from sculpture and furniture design to stained glass and metalwork—reinforced the era’s discriminatory gender roles. When prospective student Anni Weil applied to the architecture program in 1921, Gropius’s response was blunt: “It is not advisable, in our experience, that women work in the heavy craft areas such as carpentry and so forth,” he wrote. “For this reason a women’s section has been formed at the Bauhaus which works particularly with textiles.” Bauhaus painting master Oskar Schlemmer’s view of women was equally small-minded: “Where there is wool, there is a woman who weaves, if only to pass the time.” 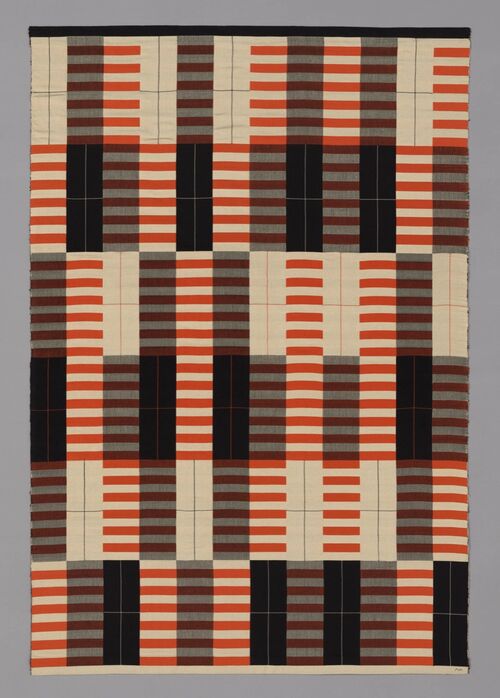 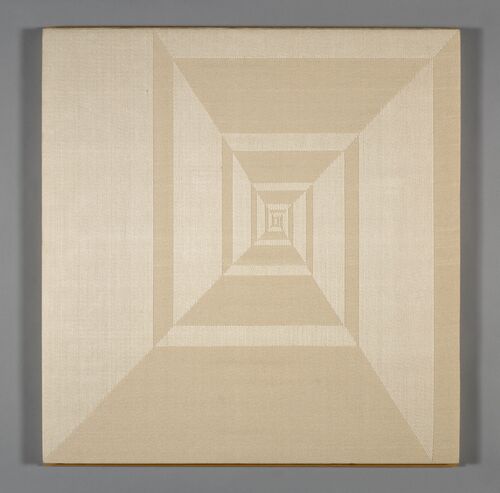 Most women who entered the Bauhaus indeed ended up making textiles in the weaving workshop, Gropius’s “women’s section.” Despite the limitations imposed on them, artists like Gunta Stölzl, Anni Albers, and Marli Ehrman made the weaving workshop not only the Bauhaus’s most commercially successful sector, but also one of its most collaborative and audaciously experimental. “Clearly this was a place of groping and fumbling, of experimenting and taking chances,” Albers remembered in 1947.

Together, these artists reinvented the formal and functional possibilities of thread, a pursuit that transformed both the future of textiles and of abstract art. After the Bauhaus shuttered in 1933 and Albers and Ehrman relocated to the U.S., they forged new communities of female artists intent on ushering textiles—a medium long dismissed as so-called “women’s work”—into the fine art canon. This fall and winter, “Weaving Beyond the Bauhaus,” an exhibition at the Art Institute of Chicago, maps both the weaving workshop’s exuberant spirit of experimentation and its far-flung influence on artists across generations, linking Albers to contemporary sculptor Sheila Hicks and Ehrman to the likes of revolutionary fiber artist Lenore Tawney. 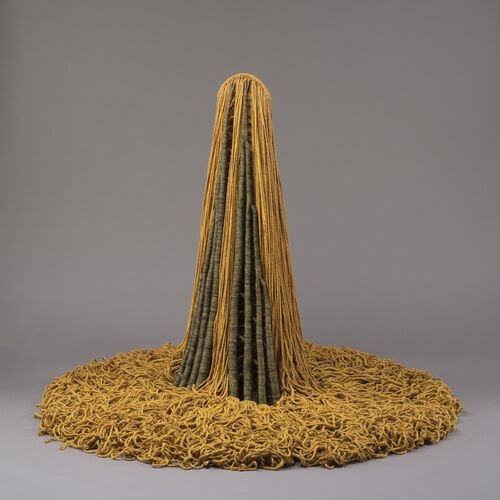 The power of this show lies in its ability to connect innovation with collaboration. Across the exhibition, curator Erica Warren highlights not only the individual contributions of each artist, but also the mentorships and friendships that bolstered them. “Women supporting women”—to borrow a contemporary tagline—is its subplot. “I find that it’s really valuable to look at relationships between groups of artists,” Warren explained, “and the role that educational institutions, museums, galleries, and professional and personal affiliations play in bringing artists together and really impacting their practices. I wanted to tell a story about that.”

The story begins in the Bauhaus weaving workshop. In the school’s early years, there was little to no formal instruction in the weaving sector—students learned by playing with materials and bouncing ideas off of each other. “What I learned I learned from my co-students,” Albers remembered in 1968. “It was in a great muddle and there was a great searching going on from all sides…but it wasn’t that you went there and were taking something home from there. You were a contributor.” 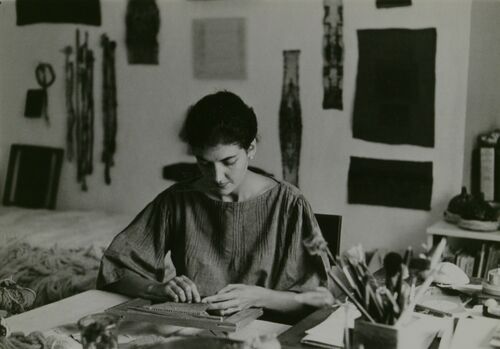 This “great muddle” inspired great improvisation. Weavers fused loom weaving with hand weaving, and eschewed patterns in favor of making unexpected, undulating decisions on the loom—a process akin to painting on canvas without following a preparatory drawing (a method encouraged by Bauhaus painting instructor Paul Klee). They embedded cutting-edge, utilitarian materials like rayon and lurex into their work, too. For her thesis project, Albers created a new fabric that simultaneously reflected light and absorbed sound by joining cellophane and cotton.

Even after master weaver Gunta Stölzl became head of the workshop and began to establish a formal pedagogy, she encouraged artists to play with materials and tools on their own before demonstrating specific skills. She recognized this approach as “a way to unlock the potential of all of these really talented artists,” Warren explained. 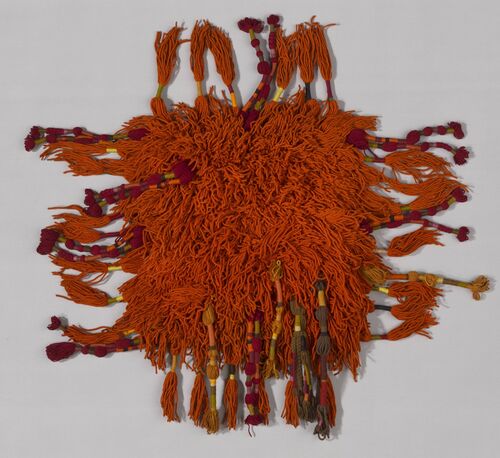 Claire Zeisler, Hanging, 1950–91. Courtesy of the Art Institute of Chicago.

When the Bauhaus closed due to decreased enrollment and increased pressure from the Nazi regime, Albers and Ehrman ferried these methods to the United States, where they posted up as instructors at progressive art schools. Albers landed at Black Mountain College in Asheville, North Carolina, while Ehrman found a post at Lázló Moholy-Nagy’s New Bauhaus (later known as the Institute of Design) in Chicago. (Stölzl established a practice in Switzerland.)

The exhibition focuses on the lineage of American artists connected to Albers and Ehrman—in particular, the community of mostly female artists orbiting around Ehrman and her students in Chicago. Ehrman taught briefly at Black Mountain College and Chicago’s Hull House, but it was at the New Bauhaus where she wielded her greatest influence as the beloved instructor of some of the 20th century’s most innovative artists working with fiber—Else Regensteiner, Claire Zeisler, and Tawney among them. 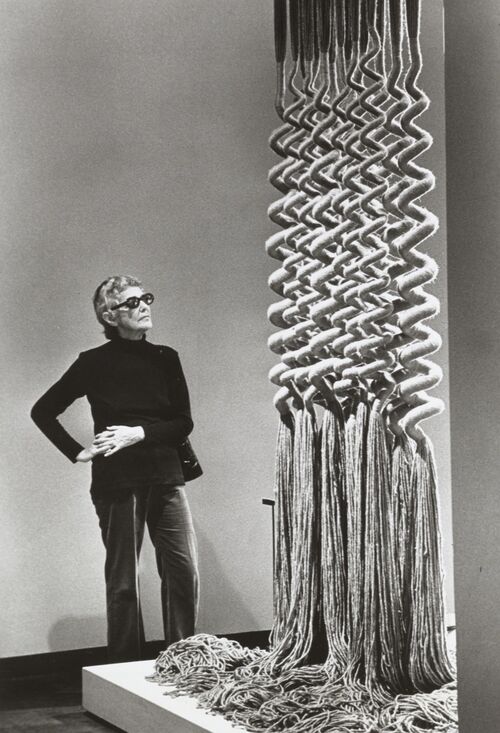 Ehrman’s students were so dedicated to her, as Janet Koplos and Bruce Metcalf point out in Makers: A History of American Studio Craft (2010), that when the school’s weaving workshop eventually closed, they incorporated themselves as the “Marli Weavers” to “preserve the spirit of the former class and to promote the study of handweaving and design.” In 1991, Regensteiner gushed: “Everything I have achieved during the fifty years of my career had its source in the Bauhaus philosophy and the guidance of Marli Ehrman.”

For her part, Regensteiner went on to found the design studio reg/wick with fellow New Bauhaus student Julia McVicker. There, they created custom fabrics for the likes of Ludwig Mies van der Rohe and were included in the Museum of Modern Art’s watershed “Good Design” exhibition series (1950–55) alongside Ehrman, Albers, Charles Eames, and others.

Zeisler took a more sculptural approach. She was one of the first to weave yarn into monumental, three-dimensional forms. “From the beginning [Zeisler] concentrated on extending the boundaries that limit weaving techniques,” pioneering Chicago gallerist Katharine Kuh, who represented many Bauhäusler and their successors, explained in a 1979 catalogue essay for Zeisler’s retrospective at the Art Institute of Chicago. “An inveterate innovator, she focuse[d] on three-dimensional and spatial possibilities, turning volatile fiber works into a new kind of sculpture.” 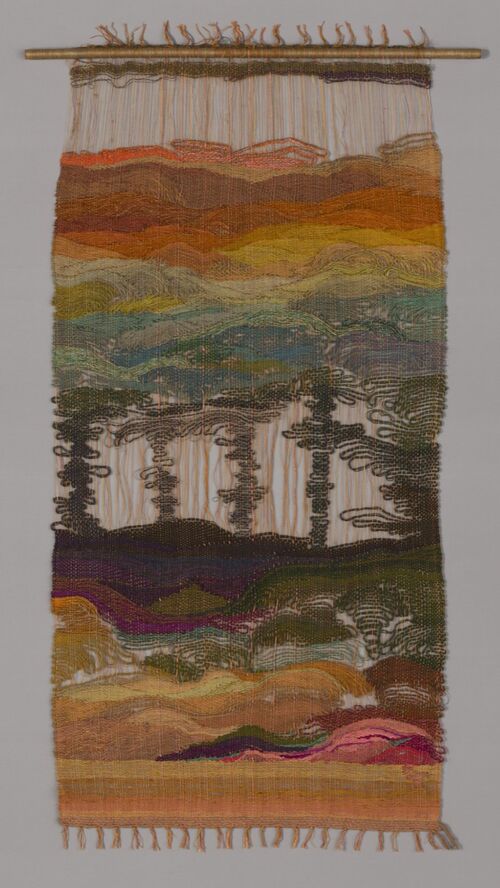 It is fellow New Bauhaus student Lenore Tawney, though, whose work reveals the most delightful connections between her community and her deeply innovative practice. Tawney not only studied with Ehrman, but also forged long-lasting friendships with Zeisler, Kuh, and artists Ethel Stein (who studied with Josef Albers) and Sheila Hicks (who met Anni Albers while studying at Yale and is one of the only artists included in the exhibition who is still living).

Like Zeisler, Tawney expanded the scale, density, and texture of woven artworks. “[She] was a very important pioneer in the field,” Zeisler said of Tawney in 1981. “[She] reached her peak before I had.” Tawney’s works were indeed unprecedented. She punctuated skeins of silk and cotton fibers with airy voids and natural objects like feathers, stones, and sticks, then suspended her towering constructions from the ceiling, as if floating. “All my work should be hung out from the wall, as space, or breathing, is part of it,” she stressed in 1982. 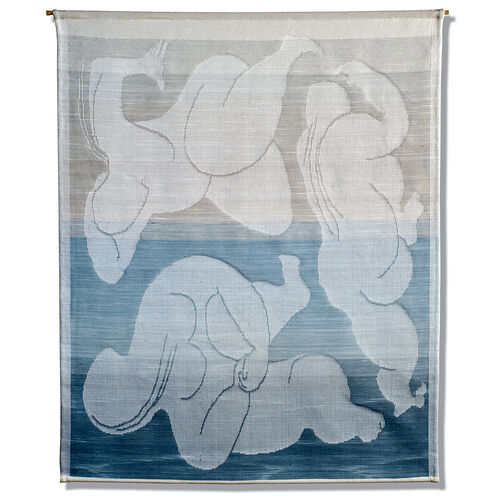 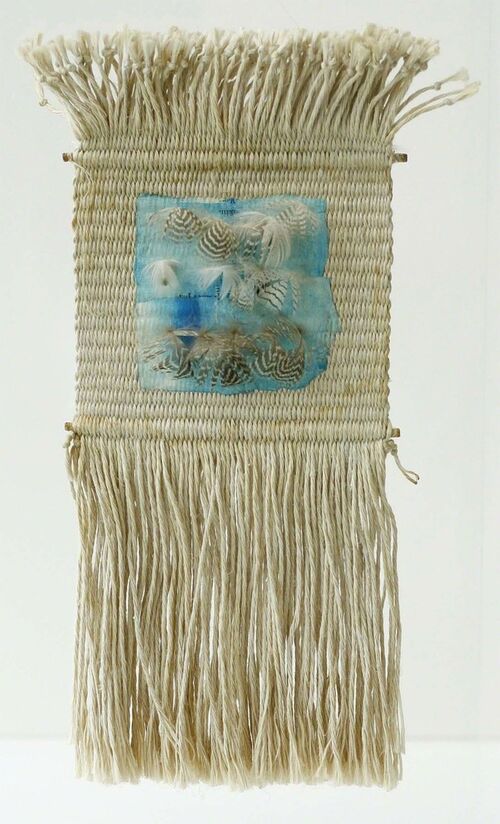 Somewhat unexpectedly, her practice also extended to collaged postcards and letters, which she sent to fellow artists and friends around the world, like Kuh and Stein, with whom she shared ideas. Several are included in the exhibition, and they feel like its crown jewels. One envelope to Stein incorporates materials Tawney used in her monumental works: a small feather and bits of found paper. More interestingly, though, are its contents: article clippings meant to inspire Stein, and a note of encouragement from Tawney scrawled in haphazard cursive. “Dearest Ethel,” she wrote, “I find these things do help. Love, Lenore.”

Nowhere in the show is Warren’s thesis more clear. Among these artists, formal experimentation was nourished by close relationships between women and the abiding support they offered one another.

The Intertwined Lives of Artists in a Community in Rural Maine